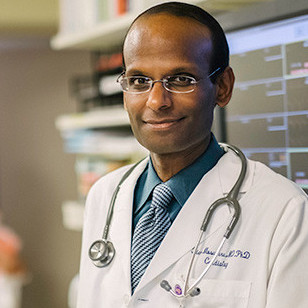 03:59 The PCSK9 story: a gene mutation that lowers cholesterol and risk of coronary heart disease

12:44 Kiran introduces Verve Therapeutics (and politely demonstrates that Laura has been pronouncing “Kathiresan” wrong for the past 9 months): going after “genetic superheroes.” Why are some people protected from heart disease?

14:54 Monoclonal antibodies are available to mimic the effect of variants that knock out production from PCSK9, but provide frequent injections. Could gene therapy be a lifetime fix?

20:59 PCSK9 gene therapy works in mice, but mice… don’t actually get heart disease. Will it work in humans? Kiran describes his use of mice with humanized livers. Creepy? But it works! Cool?

25:29 The advantages of base editing – a new CRISPR gene editing technique that avoids the messiness associated with double stranded breaks.

29:14 The first target for Verve Therapeutics? Individuals with Familial Hypercholesterolemia. And then?

34:14 Verve has ambitions well beyond the rare FH homozygote. Who else would be a good candidate for cholesterol-lowering gene therapy? Kiran points out that a one-dose could help heart disease patients who fail due to a lack of continuity in care – but at what cost?

38:59 Maybe everyone is a target. Could gene therapy function as a sort of high tech vaccine?

41:39 Do we do this in children? In embryos? Speaking for himself and on behalf of Verve, Kiran says the therapies will be directly only at adults, who can give consent.

44:14 How long until we see this in humans? Verve’s series A financing gives them funding for 3 years of work, at which point they expect to be ready to first in human studies…

Kiran Musunuru, Associate Professor at the University of Pennsylvania Perelman School of Medicine, is back on The Beagle to talk about Verve Therapeutics, a company that announced its arrival earlier this month, with the modest goal of protecting the world from heart disease (honestly, “protect the world form heart disease" IS the Verve tagline).

Verve’s ambitions are founded upon work by Kiran, among others, that is directed at using gene therapy to fix – or even prevent – high cholesterol levels associated with increased risk of heart disease, the single most likely cause of death in adults. A small number of people carry a naturally-occurring variant that keeps their cholesterol levels low throughout their lives.

Can we use a CRISPR-based therapy to mimic that effect in people with sky-high lipid levels? And what about the rest of us? Kiran and the co-founders of Verve ask us to imagine a world where gene therapy is used like a vaccine.